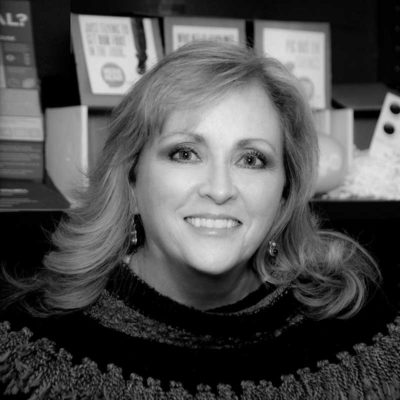 By Michele Stillwell, Director of Marketing and Accounting at MEDiAHEAD

I am pretty sure we all feel the same about this… Good Riddance to 2020!!!

Never in all my years have I ever gone through anything like this. And I’m sure you haven’t either. But I would like to put a positive spin on this blog. Even if you don’t agree with me totally, I am going to put this out there for us to ponder.

Let’s think about 2021 and all the great things to look forward to.

I am going to try to think positively and hopefully everyone else will as well. We’ll have a vaccine for this horrible virus (fingers crossed) so let’s wipe this thing out. Let’s begin to eat out again and support all our small, local companies and restaurants that are still with us and help them out. Let’s travel. Take the vacations that were put off. Book them and get out and see this wonderful and beautiful world we live in. 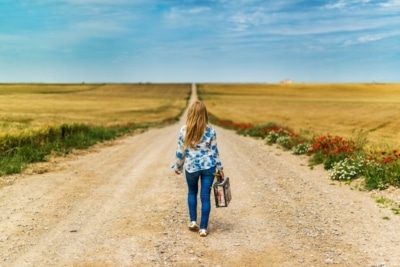 How about all the relatives we need to go visit that have missed our faces/hugs that have been so needed for over a year? Book those trips, see those relatives and give those great big hugs. If you have the opportunity to get back into the office, you should do so. Being around people and your friends is a good thing.

Let’s all look forward to:

Then think of all the events like the Olympics, football and baseball games you will be able to do once again. They may not look the same, but I truly believe we’ll get going once again.

I believe that as we look beyond 2020 and the coronavirus, there are things that will make 2021 a better year. A couple of things we know for sure going into the new year is that we know how to test for and treat the virus. Think of all the anti-viral remedies that are out there for other types of viruses that we’ve been successful with. I have complete confidence in this one.

I am so ready, and I am sure you are too. 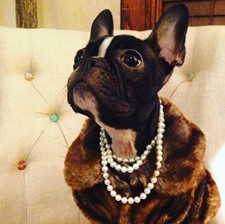 Hi friends! It’s Izzy again with a Happy Holidays message for you.

I sure hope you have a virtual holiday party to go to. I found the perfect ensemble and I’m so ready for mine. What do you think? Is it too much? I’m lovin the pearls… not sure about the fur?

This holiday season is surely different from the rest, but we can totally make the best of it don’t you think? I think it would be wonderful if we all get all gussied up and invited each other to virtual parties.

We can have toilet water, then some greenies, eat some fruitable skinny minis, or drink from the kitty bowl. Then to top it off, we can have a few freeze-dried raw chicken hearts.  Sounds so delish! I need to make sure I don’t overdo it. 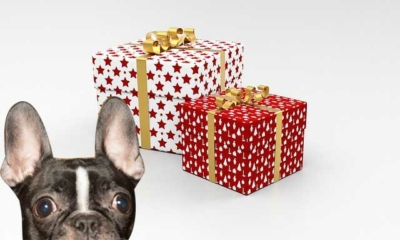 I just love the holiday season and snoopin around all the packages.

Sometimes, I untie the bows and drag them around the house. Then the cat chases the ribbon, and knocks things down, and then she gets in trouble. HA HA!

Barking of presents, I sure hope I get a baby brother or sister pup to play with this year. Do you think I will??? Oh boy!!!

Let’s not forget about the shelters!

I would like to take a minute to put in a big growl out to all the Shelters in Kansas City. They need all the support we can give them this time of year! Some that take in animals include KC Pet Project, Unleased Rescue and Great Plains SPCA. And there are plenty that help humans as well, like City Union Mission, Restart and Sheffield Place.

This time of year is tough on us all, even tougher due to the pandemic. So please think about all the shelters. If you can go adopt a pet, or give to one of these great organizations, it really makes a difference during the holidays.

Here’s to you this holiday season!  Wishing you and yours all the best! I will drool on you in 2021. 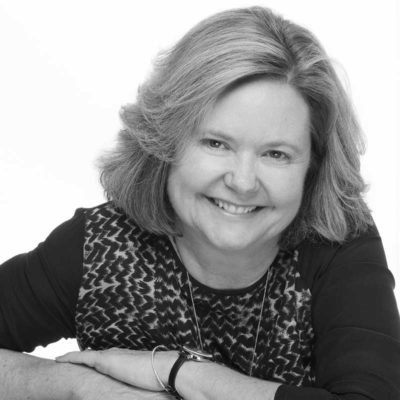 My children (and I) did not discover Elf on the Shelf until they were in their twenties. As adults, we would all take turns every night putting the poor elf in many hilarious positions to surprise each other in the morning.

According to the book, Elf on the Shelf by Carol Aebersold, Santa sends an elf to each house to be his eyes and ears to determine who is naughty and who is nice. Each night, the elf flies back to the North Pole to report back to Santa, and then returns back to the home they came from.

When Christmas time rolls around, honestly the only way to survive it at our house is to have fun with it. The McDaniel tradition is to think up a million ways to entertain ourselves by putting the elf in situations that are something less than PG.

Our little Elf can get himself into quite a few pickles.

From obnoxious pranks to inappropriate scenarios, that little elf has been put into many, many compromising positions.

My favorite time with Elf was when Amy and I lived in the Crossroads. Many times, we woke up to Elfie sprawled face down on the balcony wrapped around a bottle of J. Rieger Gin, with frost forming on his little body. 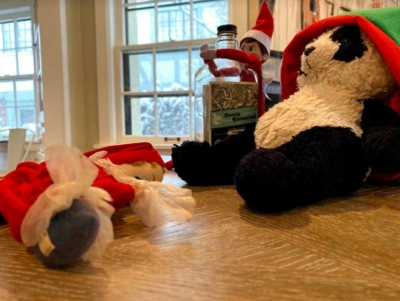 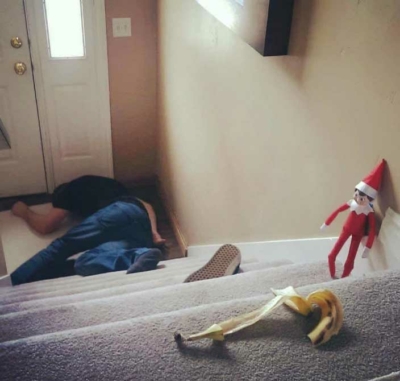 We lowered him on fishing wire with a tiny set of toy binoculars to the floors below, so he could spy on the other loft dwellers.

He was roasted, microwaved and frozen in a block of ice.

Last year, Elf’s girlfriend Santa Baby came to live with John and I. Many hilarious scenes ensued – one night they even got Teddy lit on a bottle of wine.

My daughter alerted me that this year they are selling clothing for the Elves – when I Googled it, one of the questions was “Can Elf on the shelf wear Barbie clothes?” My thoughts are now rampant as to what we will do with the Elf this year.

Some 2020 themes I am thinking of – a mask of course, Elfie in a dumpster fire, evil Zoom elf and home school frazzled parent elf.

My first December elf today was bacon wrapped and in the cast iron skillet for John – just a little sizzle to get him moving on this cold morning. 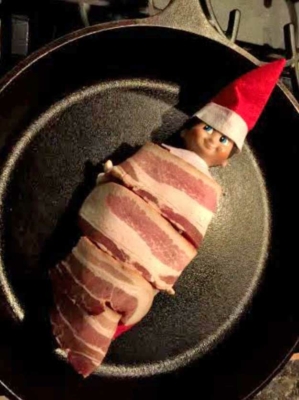 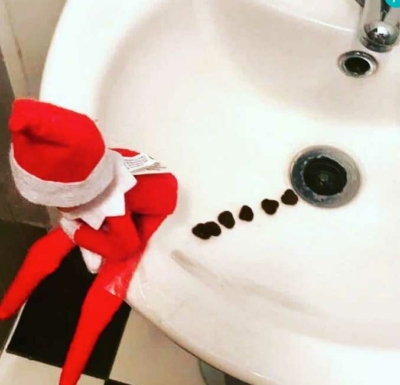 This morning I laughed so hard I spit my coffee out when Tom Mentzer posted a picture of himself as the Elf on the shelf. You’re welcome at our house anytime! 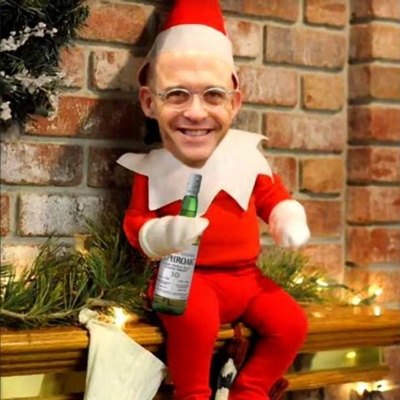 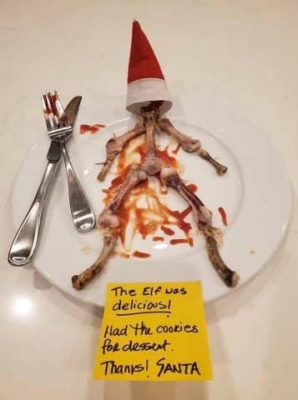 Have some fun with your Elf this year – we can all use a little more laughter right now. 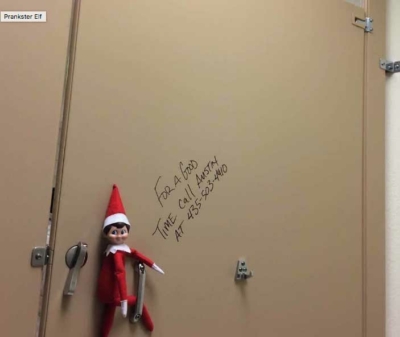 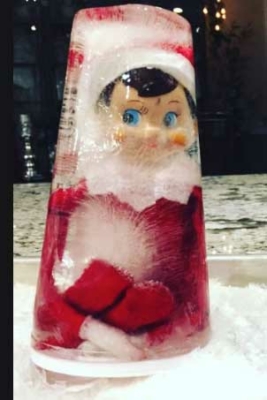